How The Garden Is Growing

The garden is coming along but more work needs to be done, grass and weeds freely take over in five minutes.  If I didn't have to water the garden the weeds wouldn't grow there, catch 22 really. 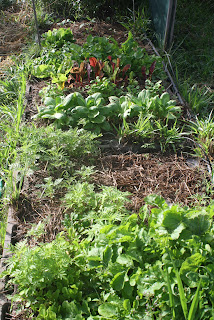 We currently have growing rocket, coriander, spinach, lettuce, corn, bok choy, cauliflower, broccoli, capsicum, zucchini, beetroot and tonne of self seeded cherry tomatoes which are very triffid like.  There are also some self seeded marigolds too which is very good for the garden and add some colour when they flower. I need to clean up the first garden and put in beans, just need to get over my sore muscles from returning to my fitness class after a five week break. 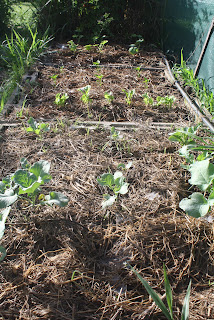 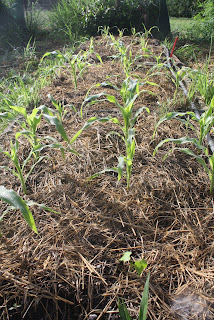 The reason I am so late with a lot of this was firstly we had no water for the garden and then we had no manure to refresh the soil, both of these things have been rectified and everything is growing nicely now.

We have been eating our bananas which are lovely and sweet, we just can’t eat them fast enough, they ripen so quickly.  The plan to cut just one hand at a time went out the window when the plant broke, however I still think it is a good plan, will make it work next time.

Something is also eating the strawberries, we have heaps on the plants and they are really healthy but something is munching into them, I don’t mind sharing as long as I get some.   They never make it inside, I just eat them in the garden, so, so sweet.

My partner in crime and life has great difficulty telling the difference between a plant and a weed (and some weeds are useful too), and so ripped out the chives I liberated from underneath the old winged beans.  This is why I prefer to be there when he is weeding.  Anyway, I have now bought some new garlic chives and need to put them in a safe place, I am thinking under the paw paw near the strawberries which is protected by wire, not sure yet, still thinking on it.

I am going to plant some winged beans down at the creek under the pigeon peas, and also going to put some old wire over the guinea grass and lantana and plant more beans there in the hope they will smother some of those weeds.

I planted two chokos there to do the same thing and they are going along very well but it will still be a while before they are big enough to smother anything. 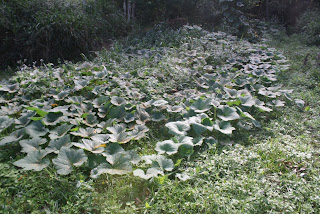 The creek garden is the garden that has to look after itself, and everything is doing well, I think because the soil is pretty good, it is moist and it is protected.  So we have some great producing paw paws, healthy pigeon peas and a large pumpkin patch (though as far as I can see there is only one pumpkin on it, but a very healthy one). 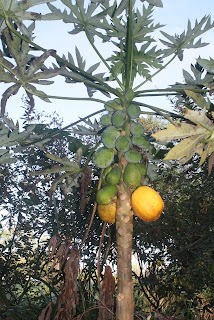 I am thinking I will also put some sweet potato down there too, though the bandicoots always dig them up so I am still deciding on that one.  I am definitely going to put bananas there but unsure of the location, must be the right spot.

I want to start doing some macramé and have cord for it and some patterns , so today I am going to have a practice, just something else to fiddle around with.
Posted by KJ at 9:17 AM

KJ
I am a mother of one son and have one partner in crime and life. I am as environmentally friendly as I can be, and take being green seriously, with being too young, too old, too hard, as no excuse. I have a garden and orchard, make stuff and want to live an interesting life. I teach Tai Chi, which I love, and live a healthy life and try not to have many vices, except chocolate :D I try not to miss the opportunities that are thrown in my path and believe that people enter your life for a reason, even if it is not obvious or even for very long. 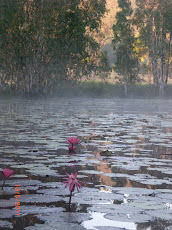 Misty Morn on the Dam